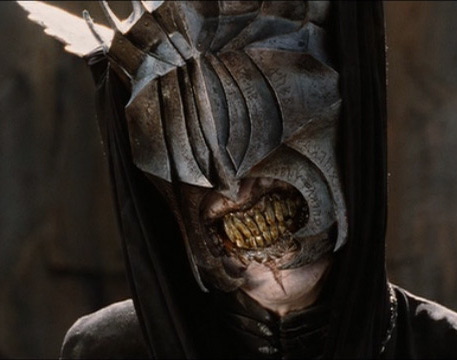 The Mouth of Sauron in The Lord of the Rings: The Return of the King

The origin of the first Black Númenóreans is in the latter half of the Second Age. Lovers of power over lesser men, these Númenóreans became corrupted by Sauron, coming to hate all good peoples.

They settled in Middle Earth mainly in Umbar and surrounding coastal regions. After Sauron's downfall at the beginning of the Third Age, the bloodlines of these Númenórean descendants mixed with other peoples, especially the Haradrim over which they had dominion. During the first millenia of the age, they proved strong enemies of the Dúnedain of Gondor, but were permanently scattered when Umbar was taken in TA 933, and when the subsequent siege was broken in TA 1050.

As men, they are imposing in their height, with angular features. They also make strong warriors, proud of their heritage. Thus they still retain many of the ancient characteristics of the Edain, like their cousins the Dúnedain.

Mume Black Númenóreans are wanderers from the far southern lands. They are allied with orcs and trolls who directly or indirectly serve the will of Sauron.

BN's have a number of penalties:

An excerpt from Vecna's Guide for Black Númenóreans:

"Let me introduce you to your selected race. You will be hunted, killed, and overkilled constantly. You will suffer from depression, an ailment caused by either dying, (mobkilled, playerkilled, or falling into a death trap) or backfiring your spells. Your willpower and your maximum mana will be reduced during depression. You will have no hometown (orcs have New Orc Caves, and Trolls have Warrens - both places are aggressive to you). You will have no shops. Your stats will be worse than the free races. You will not have a focused staff. Your skills will be lower percentages. Your spells will cause less damage or effectiveness. Your spells will be slower than other races.